The array of strange plants, impressive variety of colourful flowers, up-close views of Simu and Suam Gorges, and the hot springs at the head of Suam Gorge, make a visit to Mt Elgon’s caldera floor a most rewarding experience. The summits too present interesting views of the surrounding landscapes.

Mt Elgon, the fifth highest in East Africa, straddles Uganda and Kenya, about 140km northeast of Lake Victoria. Measuring 80km from north to south and 50km from east to west, more than half of it lies on the Ugandan side. Its caldera in particular is almost entirely in Uganda.

During the years of political instability in Uganda until the late 1980’s, large animals on that side of Mt Elgon were wiped out. The Kenyan side too had its share of insecurity from 2005 to 2008, when a guerrilla militia called Sabaot Land Defence Force (SLDF) occupied the area, rendering it unsafe for hiking. Thankfully, security was finally restored in both countries. The Elephants and Buffalos left on the Kenyan side have lately started venturing to the Ugandan side.

The Sasa River trail is accessed through Budadiri centre, the location of the Uganda Wildlife Authority (UWA) office where you’ll make payments and arrangements for your climb. 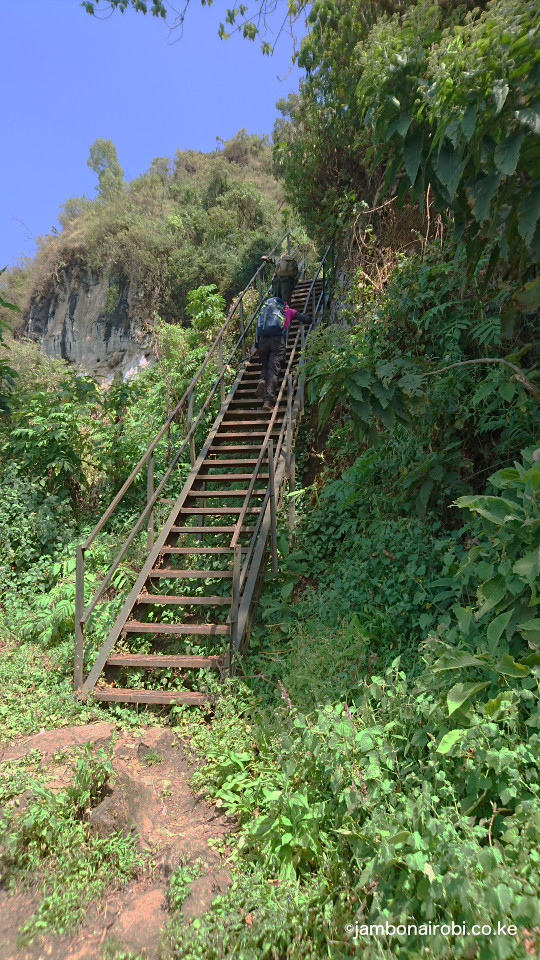 On the first day, you’ll be driven 6km from Budadiri (1250m asl) to the trailhead at Bumasola (1711m asl). From here, the trail goes through community farmlands for about 3km to the national park boundary. It then ascends sharply for 2km to the Wall of Death, the 300m high Mudange Cliffs that used to be climbed by ropes some years back. Today, metal stairs have been put in place, making it easier to get past this hurdle. After climbing three sets of stairs, the trail continues along the cliff edge for a sort distance, with a frail wooden barrier as the only protection from the sheer cliff drop to the boulder-strewn fields below. Rock falls and landslides from these cliffs have occasionally befallen the communities living below.

As you make your way further up the trail, the tropical forest gets thicker with tree species like the medicinal Prunus Africana, Elgon Teak, Podocarpus and Cedar among others. Higher up past 2500m asl, the Hagenia abyssinica becomes predominant. 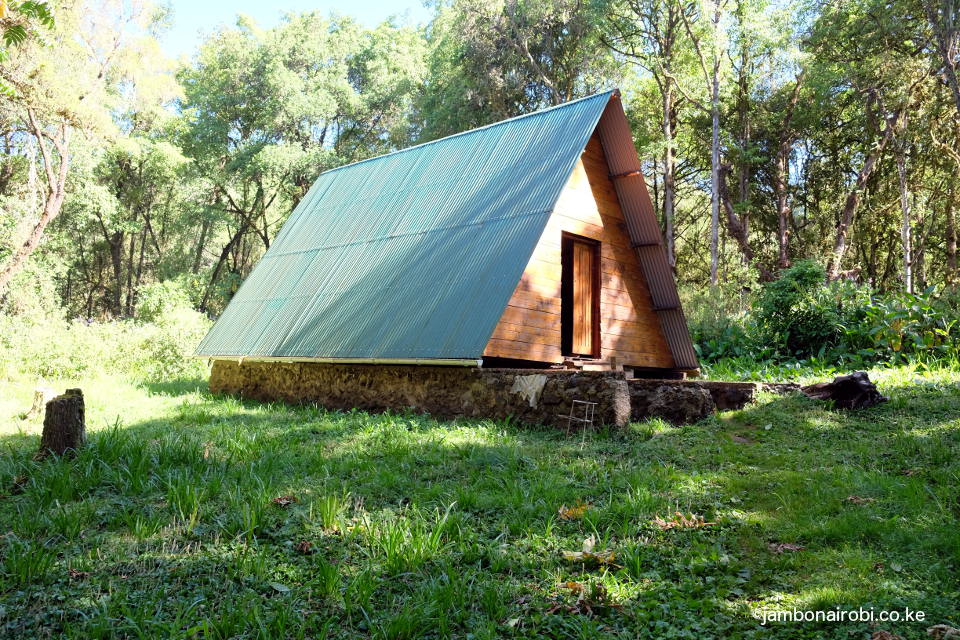 It will take you about 5-6hours hiking from Bumasola to Sasa River Camp at 2,900m above sea level (asl). The campsite is situated next to the Sasa River. It has drop toilets, a corrugated iron sheet cabin structure for the guides, cooks and porters, and a large cabin with a steep green roof for visitors. You can also pitch your tent on the grounds.

This is a short 2-3hr hike that could be done on the first day, or tackled after a night over at the Sasa River campsite. Half of the trail is still under forest cover, primarily Hagenia abyssinica, hypericum, and bamboo, though the bamboo on this side of Mt Elgon is sparse. On the second half, the forest is replaced by moorland species like the giant heather, tussock grass and white and pink everlasting flowers.

About 2km before Mude Cave Camp, UWA rangers stationed at the Sasa River patrol base  will verify your park entry receipts. You’ll get to the Mude Cave Camp at 3,500m asl within 45m minutes after the patrol base. This campsite situated next to a mountain stream, includes two corrugated metal cabins for rangers, cooks and porters, and a single structure with a green steep roof similar to the one at Sasa River Camp. You can pitch your own tent on the grounds. Although the surrounding moorland landscape is open, the campsite location is in a depression under a canopy of giant heather trees. If you climb a small hill to one side of the campsite, you’ll get a view of the cliffs framing the Simu Gorge in the distant east, as well as the Sasa River patrol base on the opposite west side.

Mt Elgon has one of the world’s largest calderas, 8km in diameter, with a number of summits on its rim. The highest of these is Wagagai on the Ugandan side at 4,321m above sea level. The second highest, Sudek at 4,302m, is on the Uganda/Kenya border, while the third highest, Koitobos at 4,222m, is on the Kenyan side.

From Mude Cave camp, the trail to Wagagai summit heads towards the distinctive Jackson’s summit and Jackson’s table. Various species of white and pink everlasting flowers, and tussock grass are the predominant vegetation on this trail, with a few Senecio trees dotting the landscape. About 3km along the way, you’ll encounter a signpost for the Hot Springs to the left; keep going straight ahead. Next, you’ll come upon the shallow Jackson’s Pool, its surface shimmering in the sun. The trail then circumvents the Jackson’s summit, keeping to the left of this peak. If you look closely at the back view of this peak to your right, you might notice what appears to be the likeness of a Gorilla head curved into the rock.

The trail then descends into a small valley, before climbing to the caldera rim, and your first view of the impressive caldera floor. As you follow the trail anti-clockwise along the rim, you’ll get different views of the undulating landscape and crater lakes on the caldera floor, other peaks across the caldera, as well as the Suam Gorge breech on the far side of the caldera rim. 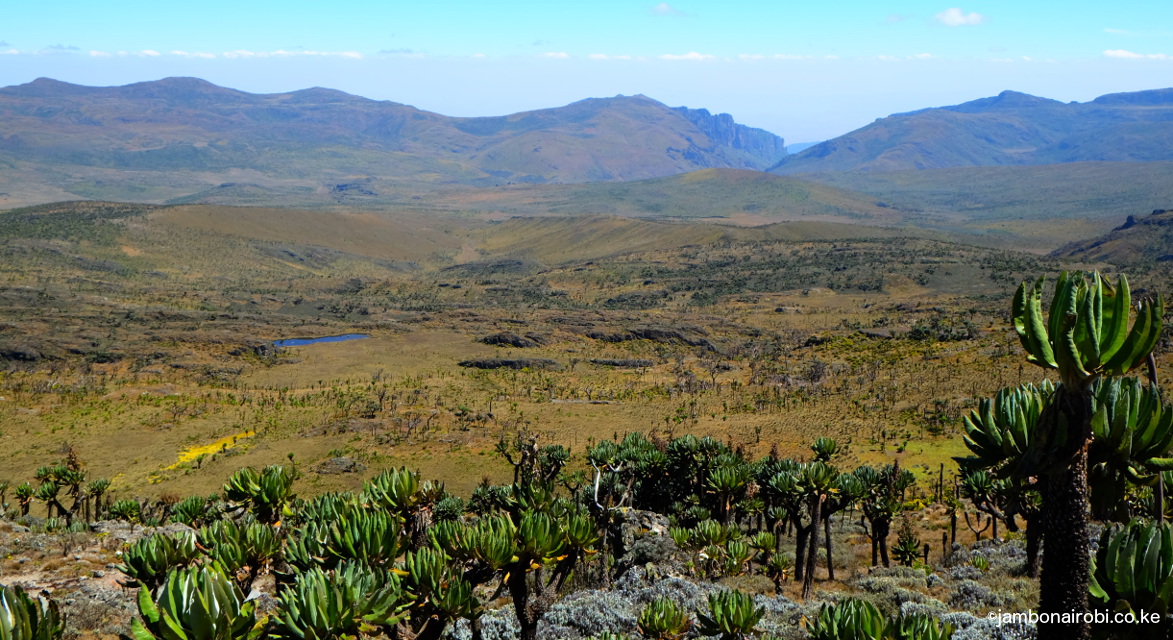 The final part of the trail is a short rocky climb to the small plateau on which Wagagai summit is located. There is a small signpost marking the summit at the top, panoramic views of the caldera, and hills and valleys stretching into the distance on all sides.

The return trip for this hike is about 18km, and should take you about 5-7 hours to complete.

Most of the route for this hike is an old smuggler’s trail used during Idi Amin’s rule in the 1970’s. Amin’s repressive regime disrupted Uganda’s market structures, leaving coffee farmers on Mt Elgon’s slopes with no means to sell their black gold. They braved the freezing conditions on the mountain, and risked getting shot if caught, to sell their produce in Kenya.

Follow the common trail to Wagagai and the Hot springs. At the signpost 3km from Mude Cave camp, turn left and follow the trail as it contours along the steep slope on one side of the Simu Gorge. You’ll go past the Mang’ong’o Caves to your right, where smugglers used to break for the night on their way to Kenya. The trail then makes its way to the head of the Simu Gorge, one of the two breeches on the caldera rim, before going over a low saddle onto the caldera floor. At this point, you’ll probably feel like you are walking on an alien planet as you find yourself going through a forest of the endemic Dendrosenecio Elgonensis trees.

As you get further into the caldera, you’ll get excellent views of Wagagai, Koitobos and other summits on the caldera rim. Along the way, you’ll go past the intersections for Sipi trail, Piswa trails, and other trails used by poachers on the mountain. Eventually, you’ll get to an intersection where trans-boundary hikes to Kenya normally pass on their way to the handover point. Turn left at this junction, and descend till you see a small waterfall to your right. The river you’ll cross at this location is one of the tributaries feeding the 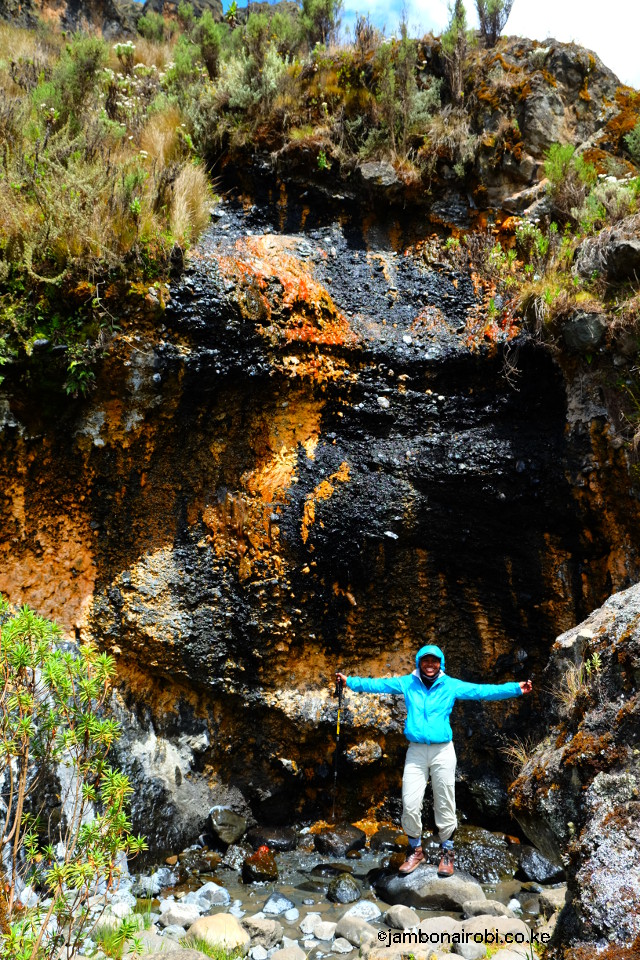 Suam River further ahead at the Hot springs. The start of Suam Gorge is a short distance ahead after the waterfalls. Cross the river and follow it’s course towards the cliffs with white streaks; those are chemical deposits from the hot water at the springs. You’ll notice the smell of the chemicals in the spring water, as you explore the area, or soak your feet in the delightfully warm pools in the vicinity.

The return trip for this hike is about 24km, and should take you about 8-10 hours to complete.

If using public means, you can take a bus from Nairobi to Mbale, Uganda. Buses plying this route include:

Alternatively, take shuttle services to Eldoret/Bungoma/Malaba from near the Railway Station in Nairobi, then cross Malaba border on foot and then get Ugandan matatus to Mbale.

Once in Mbale, take local matatus to Budadiri (1hr trip).

UWA will provide you  with armed rangers who will be your guides.  If you need their assistance, they’ll  also organize for porters and a cook for you, as well as  transport arrangements from Budadiri to Bumasola.

Designated campsites on the mountain on this trail include Sasa River Campsite (2,900m) and Mude Cave Campsite (3,500m). Camping is not permitted at non-designated locations.