Donated to the residents of Nairobi in 1906 by Alibhai Mullah Jeevanjee, this 5 acre recreational park is one of few green spaces gracing Nairobi City. The park has on more than one occasion been faced with extinction when the Nairobi City Council in collaboration with development partners planned in 1991, and later in 2007, to develop it by constructing in its place a multi-story parking lot, bus terminus, markets,  theatres and shopping malls (Zarina Patel ,“revitalising” Jeevanjee’s Gardens). These plans were shelved each time following objections raised by Zarina Patel (Jeevanjee’s grand-daughter), Wangari Maathai’s Green Belt Movement, and other activists. In 2007 some of these activists were arrested and remanded in jail for some days over this issue. Only time will tell whether the park will survive the next onslaught. In light of this uncertain future, it is a blessing that should be treasured and enjoyed by the city’s residents while it’s still in existence.

Jeevanjee Gardens’ location makes it an ideal recreation park for city residents. The Park features beautiful gardens and trees providing a welcome shade from the tropical sun. It is dotted with artistic benches, and sculptures that add to its appeal.

The Queen Victoria statue was unveiled by the Duke and Duchess of Connaught on 17 March 1906 on the eastern end of the Park close to the entrance on Moi Avenue. Prior to independence, the statue helped deter would be land grabbers in the colonial government from destroying this Park, as such action would have been disrespectful to the British Royal family. The same concern does not apply to Kenya’s post-independence governments, so there is no telling how long the political class in Kenya will  preserve the Park.

On the western end of the Park close to the entrance on Muindi Mbingu Street, there is a statue of Alibhai Mulla Jeevanjee.

On a typical weekday, you find many people relaxing on its benches and lawns, or just walking around. The Park is also home to Bunge la Wananchi (a grassroots or people’s parliament), a collection of activists who meet in this Park for informal debates and discussions on issues of the day.

Since smoking in public places in is prohibited in Kenya, one of the few designated smoking zones in the city is situated in this Park.

The Jeevanjee Gardens story is now part of our historical tour of Nairobi’s city centre, a GPS audio walk published using VoiceMap, an innovative audio walking tour app. It’s available for download from iTunes and Google Play, but you can also listen to it at VoiceMap’s website. 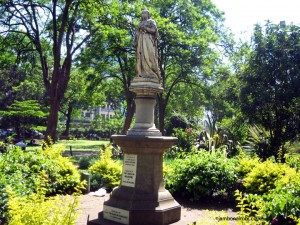 On 17 February 2015, the Queen Victoria statue at this park was vandalised, 109 years after its unveiling by the Duke and Duchess of Connaught on 17 March 1906. Only the pedestal it was mounted on was left intact. Unless well wishers or the government steps in to replace it with a replica, future generations are only left with photographic images of this piece of Kenya’s history.

The Jeevanjee Gardens is bounded by Moi Avenue, Monrovia Street, Muindi Mbingu Street and Moktar Daddah Street towards the northern end of the city centre. Its central location makes it easily accessible to residents from all corners of the city.

The Park is open for free to the public.