The distant view of Nairobi’s skyline as you marvel at wildlife in their natural habitat at Nairobi National Park is breathtaking. Nairobi is perhaps the only city in the world with a massive 30,000 acre wildlife Park at its doorstep, populated with many of the world’s most fearsome animals. With the exception of Elephants, the rest of The Big Five, Cheetahs, Giraffes, herds of Zebras, different species of Antelopes, Ostriches, Hippos, and Crocodiles are among the numerous animals living in this Park.

Of all the Game Parks in Kenya, the Nairobi National Park was the first to be established in 1946. The Park is roughly bounded by Magadi Rd to the west, Langata Barracks and South C to the north, Mombasa Rd on its eastern perimeter, and Mbagathi river along its southern flank. 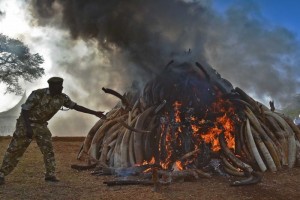 The historic 1989 burning of a $3 million stockpile of elephant tusks by the former President Daniel arap Moi at this Park raised its profile significantly, while also helping raise funding for wildlife conservation.

The natural environment in most of the Park is Savannah, providing unimpeded distant views of game in the park. Man-made dams in the Park help to attract water dependent grazers during the dry season. A forested strip frames the Mbagathi river on the southern edge of the Park, with a picnic spot located at Hippo Pools along this river. Visitors to the Hippo Pools can take a short riverine walk shaded by the forest, accompanied by armed escort. Game to look out for along this trail are Hippos, Crocodiles, Giant Tortoise, and Monkeys playing up on the trees.

While on a game drive along the tracks in the park, you’ll often find other visitors congregating at locations where one of the big five has been spotted. Even without tracking other visitors, wildlife in the park is in so much abundance that you are guaranteed of spotting them at various locations. A visit to this Park is therefore always a rewarding experience if you like game viewing. 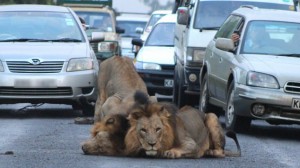 Lions in the city

Lions one time broke out of the Nairobi National Park and were spotted strolling on a city road, causing quite a stir among early morning motorists headed to work in the city. KWS rangers eventually arrived at the scene and got them back into the Park, but not before the press had a field day featuring the incident.

The main entrance to the Park is along Langata Rd next to the Nairobi Safari Walk, the Nairobi Animal Orphanage, and KWS headquarters. Other entrances include Maasai Gate near Maasai Lodge, 6km off Magadi Rd, East Gate off Mombasa Rd opposite Sameer Business Park, and Cheetah Gate on the southern tip off Mombasa Rd near the Bamburi Cement factory in Athi River.

You can do a game drive using a 2WD vehicle since most of the tracks in the Park are in very good condition. Alternatively, catch the KWS shuttle bus to the Park from the city center on Moi Avenue at Development House opposite the August 7th Memorial Park from 11am to 1pm, or catch it at the Park main gate in Langata at 1.30pm. This service is available on Saturdays, Sundays and public holidays.

Check out the latest KWS Tariffs.