When Barrack Obama Sr. conceived and planned the establishment of Bomas of Kenya in 1971 to showcase Kenya’s traditional homesteads, he probably never envisioned it’s evolution into a meeting point of the past and present. By day, cultural traditional entertainers perform songs and dances from the distant forgotten past, while by night, it is a leading venue for musical concerts performed by celebrated International Artistes to Nairobi’s urbane, sophisticated, cultured music lovers with a taste for modern genres of music.

The main attraction at the Bomas of Kenya is replicas of Kenyan homesteads from twenty-three of the country’s ethnic groups. To the casual visitor, the ubiquitous round shape of huts in the various communities’ homesteads may seem monotonous. A keen observer however will notice the unique organisation of homesteads from different communities based on the social structures and relationships in each ethnic group. For instance, where polygamy was practiced, hierarchy in the family can be observed in the homestead plan. The distribution and size of granaries by family members also sheds light on the responsibilities each family member had in the economic wellbeing of the family. Dissimilarities in the building materials, artistry, and internal partitioning of huts from different communities are also evident, giving clues to the environments, living conditions and lifestyles of each community, and the challenges their dwellings were designed to address.

Complementing the Kenyan homesteads exhibit are traditional dances performed daily in an Auditorium built in the shape of a traditional African hut. Dancing troupes from all 42 ethnic communities in Kenya showcase the country’s cultural diversity and it’s expression through song and dance. The quality of these colourful energetic performances at the Bomas of Kenya rivals those performed at Five Star Hotels in Kenya. Without a doubt, this is the high point for most people’s visit to this facility. 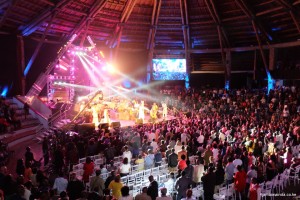 The simple exterior appearance of the Auditorium belies an interior outfitted with a state-of-the-art sound system, spectacular stage lighting, multiple large display screens mounted high up the walls, and an amphitheater seating arrangement for 2,500 around a full stage. A recent glamorous, ritzy concert by Salif Keita at this venue was such a huge runaway success; it had those attending the show on their feet most of the time, completely under the spell of the great man, his music, and the absolutely stunning light show accompanying it!

Utamaduni Restaurant, the third cornerstone of Bomas of Kenya’s cultural expose teases visitors’ palates with traditional cuisines and delicacies from around Kenya. Most of the dishes on offer are representative of Kenyans’ current eating choices, some of which are fairly recent additions to local cultures, for instance the universally popular Ugali. Nevertheless, they are all an authentic taste of Kenya’s culture, past and present.

Traditional Kenyan Homesteads
Weekends and Public Holidays- 10:00AM to 6:00PM

If using public means, board Matatu number 24 for Karen or Matatu number 126/127 for Kiserian and alight at the Magadi Road junction along Langata Road. The Entrance Gate is a short 200m walk to the left.

If driving, Bomas of Kenya is about 10km from the City Centre on Langata Rd, to the left side when you get to the Magadi Road junction.