Unreliable water supply, and lack of coverage by the water distribution network in some parts of the city prompted some private individuals and organizations to drill boreholes. A World Bank report estimated that by 2005, there were over 2250 boreholes in Nairobi cumulatively producing over 85,000m3/day, which is about 20% of the capacity from the dams. At the height of the drought in 2008/2009, AWSB drilled over 40 emergency boreholes in various parts of the city and connected them to the distribution network, to address the acute water shortages suffered by city residents. In addition, other new boreholes have been drilled by private individuals between 2005 and the present, so the current total could easily be in excess of 2500 boreholes. 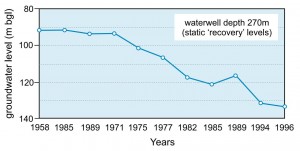 The earlier mentioned World Bank report uncovers a disturbing finding that the current utilization of groundwater in Nairobi is unsustainable, as illustrated in the chart to the left showing the drop in the water table level over the years due to over-exploitation.

Residents in some parts of Karen and other suburbs that depend entirely on borehole water are therefore faced with the risk of their wells running dry in the near future if this exploitation is not managed properly. There is clearly a need for this resource to be conserved.