Mt Suswa has a low-lying unassuming profile, belying the spectacular views you encounter up close. Most visitors to this part of the Great Rift Valley are drawn to the outwardly more prominent Mt Longonot, bypassing this magnificent volcano that is larger and endowed with some of the most unlikely and amazing formations occurring in nature. Its proximity to Nairobi also make it an ideal day hike destination.

View from cave at Suswa

View of inner crater at Suswa

Mt Suswa is a double crater volcano with a shield-shaped cone covering an area of about 270km2. Its inner volcano soars to an altitude of 2356m above sea level at its summit. The inner crater, about 5km across, is covered by a forest that is also home to leopards, hyenas, buffaloes, antelopes and other wildlife. By a twist of nature, this inner collapse formed a moat-like trench surrounding a central island in the crater, creating a breath-taking view that has to be seen to be believed.

The outer crater, estimated at about 10km in diameter, is currently dotted with Maasai homesteads. The Maasai graze their livestock on the outer crater and the slopes of the inner volcano, and harvest water for their domestic use from the numerous springs spouting steam and hot water in this area.

Perhaps the best known attractions on Mt Suswa are the lava caves on the outer crater. There are over 30 entrances, most of which are collapsed roofs into these caves. Fig trees and other types of vegetation mark the location of some of these openings, but it would be best to get a local guide to show you around the caves. A torch or headlamp is also vital when exploring these caves.

The Suswa caves are home to large populations of bats that are said to travel as far as 30km in search of food at night, and then retreat to the caves in the morning. As you walk and crawl through the caves, you can view the colonies of bats hanging from the roof, asleep and dead to the world, until evening when they stream out.

One interesting location in the caves is the Baboons’ parliament where a large troop of Baboons take shelter at night from their predators. The Baboon troops’ arrival in the evening coincides with the departure of the local bat colonies, creating two way traffic. It is said that if you peer down the opening in the roof early in the morning, you will find the troop’s leader perched on a pile of rocks at the centre of the chamber, seemingly addressing the rest of the troop perched on ledges high up the walls of the cave.

Another interesting feature in the caves is a rock painting in one of the chambers, attributed to the local Maasai morans, who apparently sleep there during one of their initiation rituals. 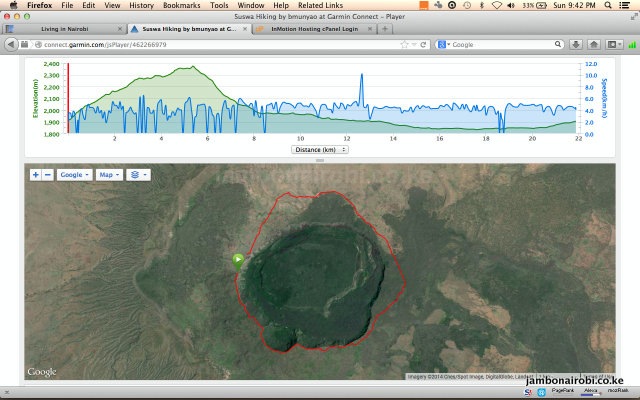 For those going right round the inner crater, the trail is 22km long and takes about 7 hours or longer depending on your pace, with an elevation gain of 1380m. Along the way, you encounter rock hyraxes darting between boulders, and small antelopes grazing peacefully on the slopes.

If using public means, take Mai Mahiu matatus from Nyamakima, then take Suswa matatus along Narok Road. The walk from Suswa Market to the crater will take you about 2 hours.

If driving from Nairobi, take the lower escarpment Naivasha Road for 58km until Mai Mahiu, then turn left onto Narok Road. 10km down this road, you’ll pass an earth satellite station, and a further 7.5km on you’ll find the turnoff on your left with a signboard for Suswa Conservancy. Drive on this dirt road for 8.5km to another signposted turnoff to the right. After 1.5km you reach the entrance. From here,  you’ll do a steep and rocky climb (4WD only) for 5km to a junction at a meadow on the edge of the outer crater.  Turning left leads you to the caves 2km down the road. Going straight for 11km and turning right for 1km gets you to the campsite and viewpoint overlooking the inner crater. You can park your car here and start the climb.

Here are other interesting blogs and links on Mt Suswa.