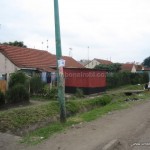 Embakasi Village started off in the 1950s as the location of the infamous Embakasi Prison, nicknamed “Satan’s Paradise”, one of the most notorious prisons during the State of Emergency imposed by the British Colonial government at the time. The mau mau suspects detained in this Prison were forced to construct Embakasi Airport between 1954 and 1958. This airport was later renamed Jomo Kenyatta International Airport (JKIA), and is today the busiest Airport in the East and Central African region.

With the end of the State of Emergency, the government and private developers built housing for low income workers in this area. These consist of rows of one- story buildings subdivided into single rooms. Right now, these buildings are rundown due to poor maintenance. In the last ten years, some private companies have been acquiring some of the house from the government, demolishing them and replacing them with modern four-story apartment blocks with one bedroom flats. Hopefully this will give the area a much needed face-lift.

Typical monthly rents are about Ksh 5,000 for self-contained single rooms and Ksh 8,000 for one bedroom flats.

While most of the houses in Nyayo Estate are owner occupied, there’s also a good number available for rent. Typical sizes are three bedroom flats going for a monthly rent of about Ksh 20,000, plus a service charge of Ksh 1,700.